I return to this statement over and over as I play the markets.  Mark Twain had unending wisdom.  The speculating public, usually not so much.  November’s stock market returns were a delightful 10% for the S&P 500 and an eye-watering 18% for the Russell 2000; thank you very much hard and fast sector rotation. 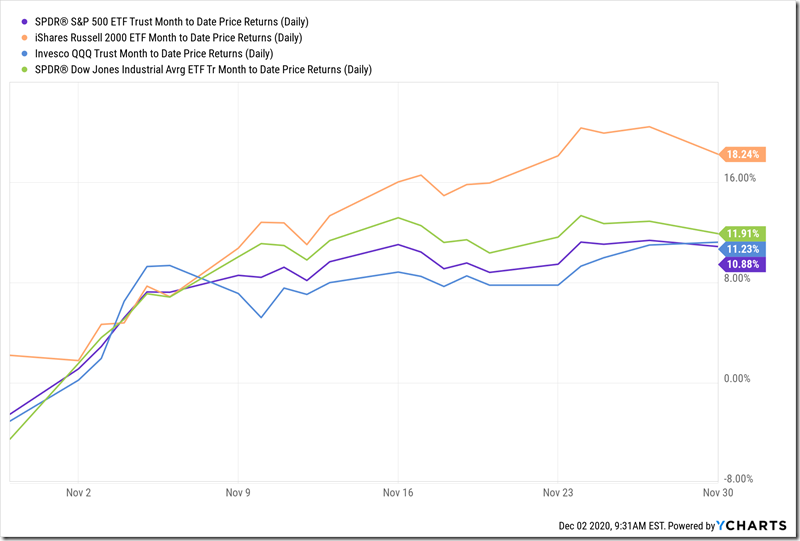 Let’s use some simple, classic technical analysis to better illustrate how muddy the waters have become.  We’ll start with the S&P 500.  Depending on your trend-line bias, there’s a few different ways to perceive current action.

It looks like a very legitimate breakout.  It’s been a hard chop since late July, but I thought we might see yet one more leg down to the high 3100s or low 3200s.  The reason for this was the curious inter-market activity among various asset classes.  Typical correlations weren’t holding up in November and the breakout just felt fake.  But therein lies the problem of using “feel.”  Obviously, I don’t just go with the gut when allocating capital but it has often paid to at least listen to it.

We know that one major, semi-new factor driving markets is option activity.  Never before has one had to care so much about option Greeks to simply trade the underlying.  Observe the enormous rise in single-equity options premiums as a result of the tidal wave of buying, most of that in Calls by retail and institutional. 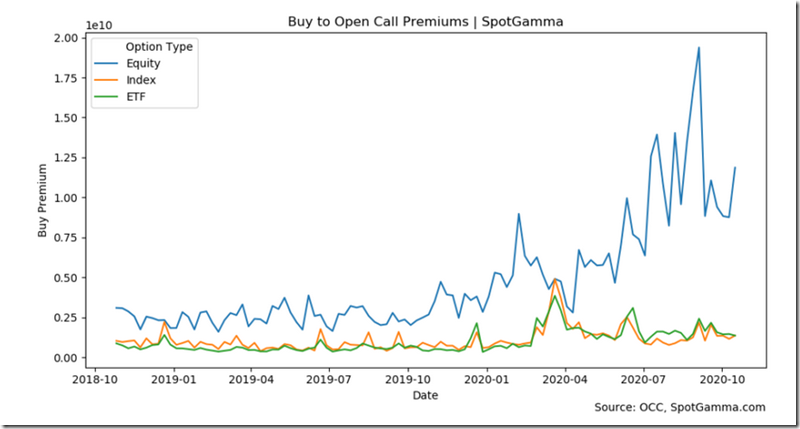 Options activity has seen market makers make unparalleled purchases in the underlying stocks in order to hedge their Call sales books.  As a result, volatility has chopped right along with the markets as moves have been fast and furious.  So where is volatility possibly headed next?  Again, the trend lines paint a couple of different pictures.

We have the current liquidity flood and more coming in 2021 to support fund flows into risk assets.  There’s also the beginning of a sector rotational move into value.  I don’t think that’s a done deal yet.  I think growth i.e. tech still has legs left.  I hypothesize that the bounce in energy and small caps is only the first strike of sector rotation, but the growth of SaaS and big tech will soon parry in 2021 which should stunt recent returns in energy and small caps…at least temporarily.

The one asset class that continues to dominate my thoughts is the US dollar.  I’m reading tons of obituaries.  They feel premature.  A swift move up to the 95 area would not surprise me here; swift relative to its usual multi-month cadence.  A “swift-ish” move in the USD would drop a hammer on commodities, which wouldn’t bode well for the recent rotation into energy.

The grains and sugar have been on an unfailing tear upwards.  Typical COT activity would have already seen correlated reversals in these crops.  I’ve seen insinuations that perhaps we’re in a regime change for those specific assets, but like the death of the dollar, that innuendo feels a bit premature.

For my own long-term portfolio of equities, I continue to evaluate the plays that many deem to have great forward looking prospects as not only technology evolves but society as well.  They may seem obvious, but it’s hard to shake what a well chosen play can mean for the potential of a portfolio.  This means gene-editing, cutting edge biotech, AI, data dissemination, and two of the oldest vices on the planet with tremendously long runways as a result of only barely being legitimized.

In the short-term, I think the commodity shorts present a most compelling current opportunity but so much rides on the USD’s anti-correlation.

If you really want to generate some returns with equities, consider after hours trading.  This has been widely reported on for a few years now, but just look at a recent chart put out by Bespoke to truly illustrate the marked difference in strategies.

Of course, 2020 has flipped that on it’s head.  See below, but after-hours is starting to reassert it’s dominance.

Stay sharp.  Recent choppy action may not be over just yet.  And with everyone predicting an amazing 2021, including myself, it might just take a little time to get the real momentum going next year.